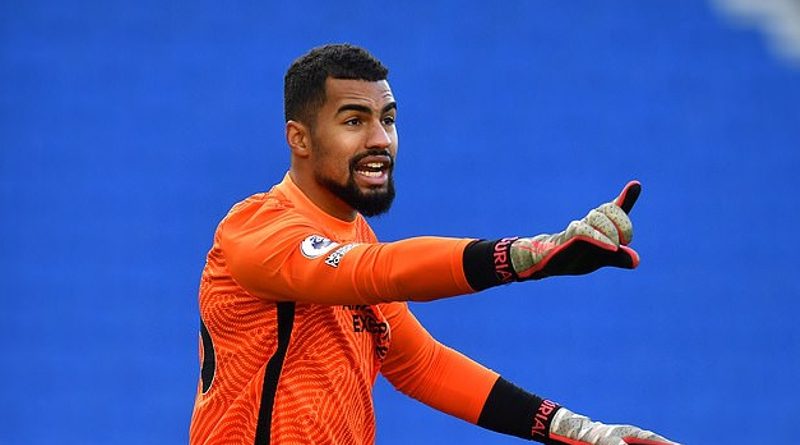 Well, who saw this coming? Brighton & Hove Albion goalkeeper Robert Sanchez has been called up to Luis Enrique’s Spain squad for the March international break.

Big Bob only made his Brighton debut in November and has played just 17 games of Premier League football in his life. Despite his relative inexperience, he finds himself taking the place of Chelsea’s £71.6 million goalkeeper Kepa Arrizabalaga.

There had been rumours of a tug-of-war between England and Spain for Sanchez’s services at international level. He qualifies for Spain through birth but having moved to Brighton from Levante when he was 15, could also play for the Three Lions on residency grounds.

Spain appear to want to leave nothing to chance and so have named him in their squad at the first opportunity. La Roja face three World Cup Qualifiers in six days in March, hosting Greece and Kosovo and making the trip to Georgia.

Should Robert Sanchez make his competitive Spain debut in any of those matches, it will end any hopes Gareth Southgate might have had of claiming him for the Three Lions.

Choosing Spain for his international future seems a sensible path for Sanchez to take. Jordan Pickford, Dean Henderson and Nick Pope would all be ahead of him in the England pecking order, whereas aside from David De Gea, La Roja are not exactly well stocked for goalkeepers.

With Henderson breathing down De Gea’s neck at Manchester United, there are no guarantees that De Gea remains number one at Old Trafford for much longer either, which could potentially open the door for Sanchez to take his place in the international setup in the future.

It is the latest step in a remarkable rise for a player who was on loan in League One with Rochdale this time last year. Sanchez began the 2020-21 season as Brighton’s fifth choice goalkeeper behind Maty Ryan, David Button, Jason Steele and Christian Walton.

Button’s sale to West Brom and injury to Walton meant that he found himself elevated to third choice after Ryan and Steele and when Ryan’s form deserted him, Sanchez was suddenly thrust into the spotlight.

To say that Graham Potter’s gamble on throwing an untested 23-year-old into the middle of a relegation battle has paid off would be an understatement. With Sanchez in goal, Brighton’s defensive record has improved markedly.

The back three seem to have far more confidence in Sanchez than they did in Ryan by the end of the Socceroo’s run as number one. That is reflected in Sanchez becoming the first ever Brighton goalkeeper to keep four top flight clean sheets in succession.

He has impressed with his shoot stopping ability but mostly with the way in which he commands the box. With Ryan in goal, Brighton looked as comfortable dealing with aerial balls into their box as the Met Police are when confronted by women protesting peacefully, which partly explains why the Albion conceded so many times from set pieces.

Sanchez though uses every inch of his 6’7 frame to come through crowds of players and collect high balls, relieving the pressure on his defence. He shows extraordinary confidence for a young goalkeeper, an attribute which will take him far.

There can be no question now that Potter made the correct decision in replacing Ryan with Sanchez. Even if Sanchez’s selection is purely to give him five minutes of action to ensure he cannot play for England, it is still a sign of just how highly rated he is. The future looks very bright indeed for Big Bob. 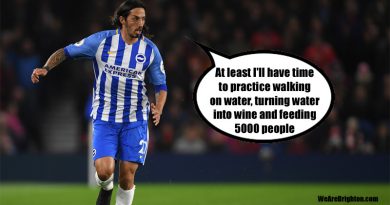 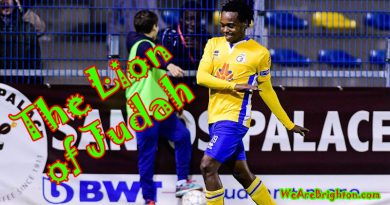 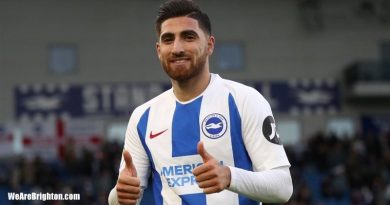 @wearebrighton
5K Following
48K Followers
A poor season for Wolves, Nuno's future and the mystery of Brighton's incredible record against #WWFC all feature i… https://t.co/6cBA3IcEGz
42 minutes ago
Brighton have lost only 6 times in 35 meetings with Wolves and never in the top flight This is the sort of head-to… https://t.co/zlLQYFhX2G
about 1 hour ago
Fingers crossed for another fruitful trip to Molineux, where a win will mathematically guarantee Premier League saf… https://t.co/UN1w5WX9qU
2 hours ago